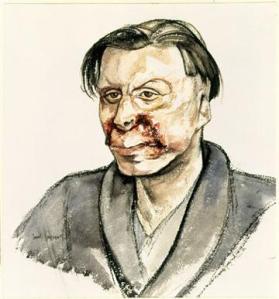 i. What aspect of war, or event, does this piece of art depict?

This piece of art, titled “Face Burns”, depicts the injury that Sergeant James F. Gourlay sustained as a member of the Royal Air Force. This painting was painted during World War II and during this war the Royal Air Force was an important division of the Allied troops. During World War II the air force became a weapon used in maritime and strategic bombing offenses. The Royal Air Force was a necessary defense against the German Luftwaffe.[1] The pilots were highly skilled but they had a ten percent chance of surviving a thirty-mission tour. [2] Sergeant Gourlay was one of the many airmen severely burned and sent to the advanced plastic surgery unit at East Grinstead for reconstruction and recovery. This artwork demonstrates the painful burns he, like so many others, experienced and the hard work performed by the staff at the hospital in order to repair the damage. Gourlay urged his crew to wear helmet, goggles, and gloves at all times while airborne to help prevent horrific injuries such as the one he sustained. This painting depicts a darker side of war; it demonstrates the perils of while fighting rather than the glory of an airman facing the enemy.

ii. Who created this piece of art?

The artist of this painting was Charles Goldhamer who lived from 1903 to 1985. He was born in Philadelphia, but later had moved to Canada with his family, first living in Owen Sound, Ontario, and then later moving to Toronto, Ontario. He began his career as an artist by drawing advertisements for Eaton’s department store and also produced cartoons for the Star Weekly. Charles attended the Ontario College of Art from 1922 to 1926. In 1928 he had begun teaching in Toronto at the Central Technical School. He taught at this school for about forty years. He was enlisted in the Royal Canadian Air force as a war artist in 1943. While in the air force, he took the job as a supervisor of art programs for the air force personnel. Charles had become an official war artist from 1944 to 1946. Many of his paintings portrayed men with severe injuries consisting of burns and other wounds. During this time, he was located at an advanced plastic surgery unit in East Sussex, England where he was able to paint these powerful paintings of the airmen. When the war was over, he had continued his career as a teacher and a painter.

iii. Where was this piece of art created?

The piece of art titled ‘Face burns’ was painted at the Queen Victoria Hospital in East Grinstead, England. Originally built at a Cottage Hospital in 1863, it was rebuilt in the 1930’s and re-named the Queen Victoria Hospital. Under the care of Archibald McIndoe, a plastic surgeon from New Zealand, the hospital became world famous for pioneering treatment of RAF and allied aircrew during World War II, who were badly burned or crushed and required reconstructive plastic surgery. Men treated at the hospital formed a club called the Guinea Pig Club, because plastic surgery was a relatively new field in medical care. The club is still active today, and the hospital is still in use and provides specialist reconstruction surgery for people in the south of England. 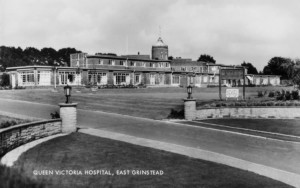 iv. For what purpose was this art created?

The piece of war art called, “Face Burns” was created to show the other men what could happen to them if they did not wear the protective gear and take their air force procedures with caution. Enrolled in the Royal Canadian Air Force, Charles Goldhamer was a war artist that focused on burnt airmen. The piece of war art that he created depicted Sgt James F. Gourlay and the injury that he suffered from being burnt as an airman. After Gourlay’s injury, “He urged his crew to wear goggles, helmet, and gloves at all times while airborne. If you want to know why, come into my office and I’ll show you” [3] Gourlay knew what it was like to have a face burn and he did not want any of his crew members to have to suffer the same way he did.

v. What does this piece of art tell us about the experience of war?

This piece of art is intended to inform viewers of the extreme risks of warfare, aerial combat in particular. Aerial warfare was an integral but dangerous part of both World War I and World War II. Injuries like the ones sustained by Sgt. James F. Gourlay were, unfortunately, common. Aerial combat made for extremely dangerous conditions, with flammable ammunition and copious amounts of fuel [4]. Countless soldiers were severely burned as direct result of these conditions. Preserving the image of such burns was likely intended not only to inform, but as a tribute of sorts to the brave sacrifices made and the risks taken by fighter pilots of World War II.

vi. How accurate is this depiction of war?

This picture is of Sgt. James F. Gourlay showing facial burns and cuts after having plastic surgery. He received them from not wearing a helmet while flying in an aeroplane during the war. This is an accurate description of the war because they were not well prepared for it to begin with. The fact that this is the first time they are using aeroplanes in combat signifies that they are not used to it and do not wear the appropriate gear because they do not know the consequences till after they have already received those injuries from it. Therefore being ill prepared for this kind of combat they would have had many such incidents until after they learned wear helmet and goggles or you get burned which the captains of those aerial division would have then stressed to their crew to wear the appropriate gear to avoid those injuries.

This piece of art furthers our understanding of Canadian history by demonstrating the physical injuries that occurred during World War II. This painting shows the horrific injuries that the Royal Air Force received. The pilots had a minimal chance of survival and even those who survived did not escape injury. The painting shows how even with plastic surgery that was advanced for the time the pilots still received wounds that would be present in their daily lives in the years to come. The painting also brings about the new take on the arts. Canada was now starting to make more of strive for arts such as, paintings, singing and acting.  Charles Goldhamer, the artist, was able to go to a college of art and achieve his dream of becoming a great artist. This painting also demonstrates the advances made in medicine during the Second World War. The painting shows that patients such as Sergeant James F. Gourlay received life altering injuries that the plastic surgeons had the knowledge and ability to be able to reconstruct badly burned or crushed patients. The more serious the injuries became the more protective gear the crew members were encouraged to wear such as goggles, helmets and gloves. With the advancement in the gear, the crew members could be protected from the harmful environment. This piece of artwork depicts the horrors of war and the technical advances made at hospitals such as the Queen Victoria Hospital in England, where Sergeant Gourlay recovered. The portrait demonstrates the physical injuries received by airmen but also leads the observer to think about the emotional and mental injuries that the soldiers would endure.