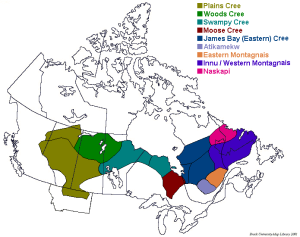 Briefly describe the Indigenous society you have been assigned

The Cree are a First Nations group located in various parts of North America, including Manitoba, Saskatchewan, Alberta, and to the west of Lake Superior, as well as Lake Athabasca. It is one of the largest groups of First Nations, which may be due to the fact that they allow and do not discourage the idea of marriage between tribes and therefore is not limited to only procreating with those of the same tribe.  The Cree Nation is one of two tribes that was included in Treaty Eight (the other being the Athapaskans) because they wanted to protect some of their rights. These rights include everything in relation to hunting, trapping, and fishing. They also had concerns in regards to the idea of only being allowed to reside on reserves as it was a huge departure from how they had lived before.

With whom did these people come into contact (individuals and nationalities)?

The Cree came into contact with many people from French and English colonies. Westward travelling French explorers came into contact with the Swampy Cree in the early 1600’s. Around this same time, on the eastern coast of James Bay, Henry Hudson and his group of English explorers came into contact with the James Bay Cree. The Cree would trade for European goods with the Ojibwa, but later began trading directly with the French at Lake Superior and the English at Hudson Bay. Due to the high density of furs between Lake Superior and Hudson Bay the Cree were very involved with the trading business, therefore being directly involved with many people from both French and English colonies.

The Cree came into contact with the Europeans in 1611, when a lone Cree man approached Hudson and his crew and upon receiving gifts of friendship he returned with furs for trade. The Cree man appeared not to favor the bargain and eventually took his goods and left. However, understanding a fair price for exchange and willingness to bargain for European goods suggests that the Cree trader was familiar with the custom of trading with Europeans. Cree oral tradition also narrates this first encounter. According to the Cree, Hudson and his crew offered European clothing in exchange for the furs the Cree was wearing. From this account from the UofC and maps we can gather and know that the Cree people ranged from around the Hudson’s bay and into the prairies.

For what purpose were Europeans in this area?

Europeans first contact with the Cree peoples was for the distinct purpose of creating and expanding trading networks deeper within the heartland of the Great Lakes region. Most recorded cases of contact reveal that the Europeans were exploring this region for economic means and as such initial encounters with the Cree peoples were often either through the giving of gifts or trade. The Europeans further explored and ventured into Cree territory to exchange in goods particularly furs, which the area was rich with. When the first European traders realized the immense economic potential of the Great Lakes region they often established a network of trading posts where most future encounters with the Cree peoples occurred through their trade of European goods for Cree furs. It is due to the region’s vast wealth in furs that allowed for the sustained development of economic and social interaction between both peoples, as well, this symbiotic relationship further encouraged deeper expansion and contact within the Canadian heartland.

How did the North American Cree people respond to Europeans?

To answer the question of how the Cree Natives responded to the Europeans was slightly difficult to answer because there were many sources of the European’s view on how they responded, but not many strictly from the Cree’s view. That being said, some of the Cree Natives were Métis; French European Fathers with Nehiyaw Mothers, or English or Scottish Fathers with Dene Mothers, so they must have got along well enough to be comfortable to mate with each other.

The Europeans and Cree Natives trusted each other during their trading sessions of European metal tools and twine with the Cree’s meat and furs. While at the exchange posts Europeans were seen as the authority figures and deeper into the land the Cree Natives were seen as the authority figures. Not all Cree Natives did, but some shown dependence on the goods from the Europeans as well as vice versa. The Cree slowly started to change the way they viewed the animals they hunted as well as the way they kept order in their community.

(The following story in quotations is from a page called Aboriginal Peoples Fur Traders which is from http://www.masters.ab.ca/bdyck/early-canada/fur/)

“An eleven-year-old Cree boy who went with his father on a trip to York Factory to trade furs for English goods tells this story:  How does he describe the trading ceremony at the post?

I could smell the sea and knew we must be close to the English trading post. We had been paddling our canoes, loaded with furs, for many days. We were glad to arrive. When we could see the post, we shouted and fired our guns as a greeting.  A loud boom from the post made me shake.  Father explained that the people at the post had returned our greeting with a shot from their cannon. We landed and set up camp just outside the trading post.  I looked for children my own age, but there were none. I was proud that my father was chosen to lead this trading voyage. I watched as he met the English leader, who was called the chief factor. Father and the chief factor smoked a peace pipe together for about an hour. Sharing the peace pipe showed the friendship that would exist between them. Then Father and the chief factor took turns giving speeches.  Father described our canoes and our furs. The chief factor told us why the English would always be our friends. The chief factor gave Father a fine set of clothing and other gifts too. The men got tobacco.  I was given a long hunting knife. The next day, Father gave gifts of beaver pelts to the English. He made another speech. He told the chief factor how far we had come, and he asked the English to trade fairly with us. We sat in a circle and the men smoked the peace pipe again. The chief factor then took us to the store room of the trading post. Only Father went inside. The rest of us stayed in the trading room. We presented our furs through a window in the wall. Then we chose knives, kettles, cloth, and guns in return for our furs.  After loading our canoes with all the goods we had received for our furs, we started the long trip home.”

The Europeans began attracting the Cree with their culture and this is when Missionaries and Residential schools started to form. These caused issues with child upbringing and separation which was a negative effect, as well as a positive effect of learning skills to form an administrative self-government for the Cree. Treaties between the Cree and Europeans started to form. The Cree became a part of the UN negotiations and dealt with the United Nations Declaration on the Rights of Indigenous Peoples. However, this also gives the Europeans the opportunity to intrude on the Cree culture.

Overall, it seems to depend on which Cree member tells you which story they have of the European in order to know how the Cree responded to the Europeans. Some of the Cree liked the Europeans while some didn’t. It is evident though that the European culture did forever have a life changing effect on the Cree.

How did Europeans respond to the North Americans they encountered?

The Jesuits discovered the Cree in the early seventieth century and became dependant on them as the Cree were their guides and hunters in the prosecution of the fur trade. When the British took over rule of the land from France, Henry Hudson explored the Hudson Bay later in that seventieth century which is where he came into contact with the Cree. Their first action was to start an economic relationship. Hudson and his crew offered European clothing for the fur the Cree were wearing. Cree oral tradition agrees with this encounter as well, saying their people (the Cree) were eager to trade. The Europeans became interested in the fur trade and traded often with the Cree. The Cree people did not understand much of fair trade and were often taken advantage of by the Europeans and would over pay for the European goods. Later in the seventieth century, the European men set out to trade with more Cree deeper into their territory and were not prepared for the wilderness. They soon thereafter came to find out that the Cree women were more than capable of providing the skills and knowledge necessary for survival. The European men began to marry these Cree women, and had children with them which were the beginning of the Métis race. The Europeans did not know what to expect when they came into contact with these Cree Native Americans, but they soon came to find out they could be trusted as close friends and reliable economic partners.