The English Acquisition of Canada & Acadia

–Who wrote the document and why?

The document analyzed is the journal of Samuel de Champlain, with particular focus on a letter sent to him by General Kirke, a representative of the King of England. In this letter, he threatens Champlain with the take over of the colonies of Canada and Acadia from the occupation of the French crown.

–Who were the settlers who tried to colonize this place?

At the time of Champlain’s journal entry, he (in the name of the French) was currently in possession of Canada and Acadia.  Though the French did have a hold on it for a while, General Kirke’s forces were stronger and then became the new colonizers of  Canada and Acadia when Champlain surrendered it to the English.

–Where was this colony located?

This colony was located at Tadoussac. Tadoussac is located in a village in Quebec, Canada, at the entrance of the Saint Lawrence and Saguenay rivers. It also makes reference to Cape Tourmente. This place is located on the north shore of the st. Lawrence river about 55km from Tadoussac.

–With whom did these people come into contact when they arrived in North America?

When Kirke and the English arrived at Tadoussac the people they contacted where done so strategically. The first people they came into contact with would be the Basque and the French transport ships. The transport ships were stopped strategically to make a point. Within the letter, sent to Champlain, it mentions that the ships were stopped in order to not allow the French to receive supplies. Champlain would be the last person they came into contact with as he was only contacted by a letter sent by Kirke, by way of the Basques. 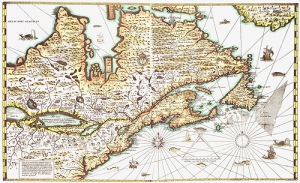 –Why did the colony fail?

The colony failed due to invasion by the English. Oddly, this invasion was not the one being threaten in the letter. In response to Kirke’s ultimatum, Champlain threatened to fight to the death. Kirke greatly overestimated the defenses of the colony, and left without capturing the colony . He returned a year later with greater forces, and quickly cut off the supply lines linking Quebec and Acadia with France. Greatly outnumbered, Champlain had no choice but to surrender. He was taken as a prisoner back to England, where he would find that France and England had actually been at peace when his precious colony had been seized. He would spend years in a political struggle to get the colonies restored to France.