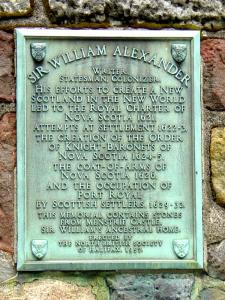 This monument, Located in Halifax NS. connects the old Scottish colony of New Scotland to the Britsh colony of Nova Scotia (PhototFrom http://ns1763.ca/hfxrm/alexwill.html)

Who wrote the document and why?

The roll was created sometime in the 19th century by antiquary David Laing of Edinburgh as a list of names and dates of appointment of the baronets of Nova Scotia from 1625 to 1628. The baronets themselves were mostly Scotsmen who took charge of plantations in Nova Scotia to assist in the supporting of a Scottish colony there. Sir William Alexander was the owner of the Nova Scotian territory and oversaw the responsibility of creating the baronetage.

Where was this colony located?

Nova Scotia, the Latin name for New Scotland, was originally defined in a Scottish Royal Charter as all land from New England to Newfoundland, which was officially part of the Kingdom of Scotland. The two major settlements were present day Annapolis Royal, where the Scots built Fort Charles, and present day Belaine

Who were the settlers who tried to colonize this place?

So, who would want to live in this rugged untamed wilderness you might ask? Well, truthfully, not many, so there in lies the problem with “New Scotland”. Sir William Alexander, the owner of the territory would spend much of his personal fortune trying to get people to live in New Scotland. It never worked out for him and he would die penniless. For those who did come over the call of the prosperous fishing camps in Newfoundland was often to much and they were side tracked away from settling instead getting into the prosperous seasonal fishery.

Now you might ask what about the Baronets list of aristocrats of New Scotland, they must have lived there? Well, no, the people on the Baronets lists were not those who settled but only land owners who had paid to lay claim to the land, so that impressive list of people never lived in the colony. Those who went over were not of such high social or economic standing.

According to the book, The Coasts of Canada, the baronets of Scotland were supposed to actually travel to New Scotland in order to receive the land granted to them by Sir William Alexander, as well as providing the necessary supplies and settlers. To get around this enjoyable and seemingly useless task (it was hard enough to get even the poor Scots to travel to the New World…) a portion of the grounds at Endinburg castle were declared part of New Scotland, so the baronets could in fact travel to the colony and gain their land grants in the New World.

In the book Essays on North Eastern North America it states that one group sent to “New Scotland” were in fact 70-80 English men and women. Now the english must not have been too good with maps as they overshot New Scotland and ended up in New France, oops.  So the search continued for people who were interested in gambling there lives on the odds of boarding a ship and sailing halfway around the world to a land that was cold, tree bound and full of French and Native people.

So “New Scotland” was made up of a handful of Scots living near a fort on the Bay of Fundy, some seasonal fishermen in Newfoundland and some Englishmen lost in New France.

What motivated these people to travel across the Atlantic?

With whom did these people come into contact when they arrived in North America?

This document gives the name and date of people who received territorial grants from Sir William Alexander, Kt., Earl of Stirling. Would have come into contact with the higher ranking officials in New Scotland at the time because they would have been able to receive their baronies from either them in New Scotland or in Edinburgh. Not all of the people listed in this document went through the proper legal structure to receive their baronies. Sir Thomas Banks has listed a total of seventy-three charters who followed the legal structure of receiving baronies.

Why did the colony fail?