This document was written by Marc Lescarbot, a French author, poet, lawyer and explorer who was born in 1570 and travelled to New France (Acadia) from 1606-1607. The document is a chapter out of the book The History of New France Vol. III written by Lescarbot and translated by H.P. Biggar, and focuses on an event that occurred between the French, English and the “Savages” (the aboriginal people of the area) between 1614 and 1616. Since Lescarbot was not in New France at the time of these events, he retells the story from the perspective of the French settlers in the area, and a Jesuit priest, Father Baird, who supposedly worked alongside the Englishmen.

Lescarbot explains that, in the year 1614, English explorers arrived on French land and, upon finding their uninhabited settlement, plundered the homes, took the horses, cows, sheep and pigs, and then proceeded to burn the camp and deface the Fleur-de-Lis. Lescarbot finds flaws in Father Baird’s story, and concludes that he was working with the Englishmen, but also uses his account to prove that the “savages” strongly dislike the English explorers. This narrative was essentially written by Lescarbot to show that, when arriving in unknown lands, the English explorers had no respect for any pre-established habitation in the area, nor did they have any interest in striking up pleasant relations with the aboriginal people. Thus proving that, although this area had a failed French settlement, the failure was due to the actions of English hooligan explorers, rather than being a discredit to the abilities of the French.

Port Royal was comprised almost entirely of farmers in its early years. A lack of land for farming in France caused many French immigrants to cross the Atlantic and start a new life in North America. Acadians were also tax-free and the excessive taxes in France at the time also contributed to the reason that many immigrants made the journey. The military presence would have also contributed to the population in the area although it is possible that many soldiers would have made this presence only a temporary one. It should also be noted that the population of Port Royal failed to grow and at times dropped during the 17th century as many of the immigrants moved away from the settlement and into less populated rural areas. This was probably caused by the many attacks that the settlement went through by the British. 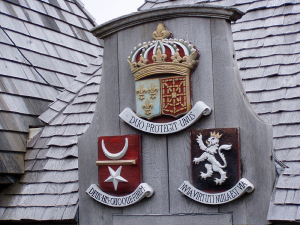 The settlers at Port Royal encountered and formed close ties with the Mi’kmaq in the region. Thanks to this alliance, characteristic of the French’s approach to colonisation, the Habitation at Port Royal prospered from 1605 to 1613 as a settlement, fur trading post, and capital of Acadia for a time. In 1613, however, the French came in contact with the English, who proved to be much more hostile than the accommodating Mi’kmaq —Englishmen from Virginia attacked Port Royal in that year, destroying the Habitation and burning it to the ground.

The colony of Acadia failed because of a power struggle with the English over the lands and territory in the new world which included Acadia. The powerful military machine of the English invaded Acadia and as a result of its victory, the colony of Acadia was passed over to the British empire as a result of the Treaty of Utrecht, which brought the end of the War of Spanish Succession. A part of the Treaty was that France was forced to turn over the land claims around the territories of Hudson Bay, Newfoundland and Acadia. The French colonized Acadia but the constant power struggle between the French and English was one of the main reasons why the English ended up taking over Acadia after these military conflicts.

This colony failed because the English invaded the French fort, Port Royal, while part of the colony was out at sea and the others were ploughing miles away.  The French at Port Royal did not expect an attack because they were not at war with anyone.  Once the English discovered the French were missing they seized the opportunity and stole livestock, all munitions of war, supplies, merchandise, and other items that could be useful.  They then burned all the remains after destroying everything in sight.