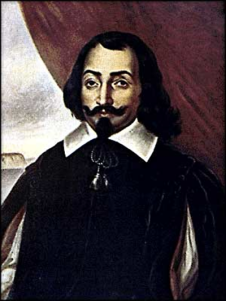 Les Voyages Du Sieur Champlain was written by Samuel de Champlain in the early 1600’s.  Champlain would have written the document to help keep track of what was going on in the colony and to document it. Most of what Champlain wrote about was the various troubles they had and how they survived, along with the journeys him and his men embarked on.

The colony was located at St. Croix Island, which is located at the mouth of the St. Croix River. It sits on the Canadian – American Border between New Brunswick and Maine.

It has been designated a national historic site by the government of Canada and an International Historic Site by the United States Government. Its known as Dochet Island to local inhabitants, although no one currently  lives on the island

St. Croix Island is located on the Saint Croix river which is the border between Maine and New Brunswick

Samuel de Champlain, along with 79 other French explorers who attempted to establish a colony on St. Croix island, but failed.

Samuel De Champlain and his men were motivated to travel across the Atlantic to explore the new world on behalf of the French government and to colonize it.

Samuel de Champlain and his company of men on St. Croix island failed mainly due to the conditions they experienced there. Winter arrived much sooner than they had expected catching them off guard and preventing them from accomplishing many of the tasks they had hoped to do, such as building a cellar for their beverages which all froze over the winter. Adding to this, the winter Champlain and his men experienced was very hospitable and unlike anything they had experienced before and much longer with a near constant three to four feet of snow on the ground for close to six months. As a result of the inhospitable conditions, many of Champlain’s men fell ill with diseases. The most predominant of these being scurvy which killed many of Champlain’s men since there was no cue at the time.

“It was difficult to know this country without having wintered there; for on arriving in summer everything is very pleasany on account of the woods, the beautiful landscapes, and the fine fishing for the many kinds of fish we found there. There are six months of winter in that country” – Samuel de Champlain