The tides are something that has been an attraction for people for thousands of years.  The tides in the Bay of Fundy, even more so because of the extreme difference between high and low tide.  The attraction of harnessing the tides in the Bay of Fundy has been present in the people who have lived in Nova Scotia for hundreds of years.  One of the closest attempts to use the energy that are in the tides was 100 years ago with Ralph Clarkson and his current motor project for the Minas Basin and Cape Split.  Ralph Clarkson in 1916 founded the Cape Split Development Corp with the president of Acadia University at the time, George Cutten.  Between the engineering background that Clarkson had and the business sense that Cutten had, the two had hoped to launch a successful corporation. The two men found an outside engineering group to build and test a motor.  The findings were very positive with the report saying that it was the most efficient current/tidal motor at the time. 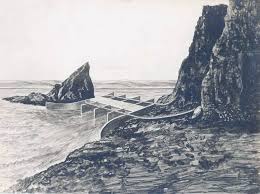 The current motor that Clarkson designed is not one that is easy to understand, I know I spend hours look at patens, and had multiple people explain it to me.  But the just of it is that its like a waterwheel that has been put horizontal instead of vertical with a number of buckets connected by a chain that would be moved by the current and turn a pump in the centre.  The really cool part about the Clarkson Motor that made it ideal for tidal energy was that there were panels on both sides that would open and close depending on which way the tide was going.  These panels or gates would open and close with the changing tides so the water would enter on the side of the motor that would be the most effective.  This meant that the motor could be used at all times.  The motor would work at the highest efficiently when fully submerged, but could work if part was above the current level of the tide.

When the idea of putting in a tidal power station at the bottom of Cape Split came up in 1916, the project was estimated to cost about $2 million (CND), or about $40 million (CND) in 2013.  To put this in context, the tidal turbine that was put in the Bay of Fundy in 2013 cost about $10 million (CND) and lasted about a month until the current destroyed it.  Since the Current Motor was never tested in the Bay of Fundy, there is no way of knowing if the same thing was to happen, but it was unexpected with the more modern turbine.  The goal to raise the money needed to build the project that the Cape Split Development Corp. was never completed.

An example of the difference of the tides. The change between high and low tide can be up to 15m

Although the project was estimated to be able to produce about 10,000 H.P. it does not appear that this idea or motor has been seriously revisited since the folding of Cape Split Development Corp. in 1920.

For more information about the Clarkson Current Motor and the Cape Spilt Development Corporation can be found at the Acadia Archives, the Kirkconnell Room.