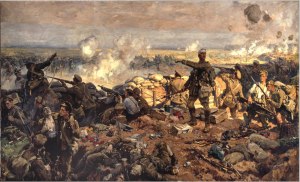 1. What aspect of war, or event, does this piece of art depict?

This piece of art depicts the Canadian involvement in the Second Battle of Ypres during April 22 to May 25, 1915. This battle was an offensive attack made by the Germans against the Allied powers for control of the Flemish town of Ypres. The Germans used a new weapon, chlorine gas which caused a green and yellow clouds to slither around the ground and into the trenches. The gas either killed the Allied soldiers or it caused them to stick their heads out from of the trenches which caused them to get shot. The French divisions were taken out by the offensive but the Canadians on the east side were able to fend the Germans off. The use of gas caused Allied troop withdrawal which created a huge gap in the front line. The Germans were unable to take advantage of this gap because they were not prepared themselves for the outcome of their attack and the effect the gas would have. This allowed the Canadians to embark on what some would call a suicide mission and hold their line. The Canadians bravely held the Germans off, combating against German attacks, artillery bombardment and chlorine gas. This gave the British enough time to get reserves to the front. This painting depicts the front line fighting between the Canadian and the German soldiers. This scene recreates the horror and death that our soldiers were faced with in the violent chaos that this battle was.

2. Who created this piece of art?

Richard Jack was born in Sunderland England on February 15, 1866 and died in Montreal, Quebec June 29, 1952. He was a member of the Royal Academy of Arts in 1914 and moved to Canada in 1930. His medium was oil on canvas. Richard Jack war artist portrays the Canadian stand during the Second Battle of Ypres, which he himself did not actually witness. The canvas was painted in his London studio. This painting was the first of almost a thousand works by hundreds of war artists commissioned by the Canadian War Memorials Fund (CWMF), an organization established by Lord Beaverbrook in order to document Canada’s war effort. The Second Battle of Ypres is still an iconic work of art from the First World War. There were no photographic images of the Ypres battle since soldiers were not allowed to carry cameras into the trenches so wealthy Canadian Lord Beaverbrook created an official war art program of official photographers and cinematographers.

3. Where was this piece of art created?

The Second Battle of Ypres, 22 April to 25 May 1915, was painted by Richard Jack. This painting was commissioned in November 1916 by the Canadian War Memorials Fund, the first painting that they commissioned. This caused Richard to become Canada’s first official war artist. He created this painting in his studio in London, England. The painting was one of the biggest commemoration paintings. It was painted on a canvas that was 371.5 cm by 589.0 cm. Jack’s painting is an iconic work from the first world war that, at first, people thought might be a too realistic depiction of war for Canadians to identify with. The Second Battle of Ypres, 22 April to 25 May 1915 is currently in the Canadian War Museum. It contains over 13000 pieces of art and many different artifacts. It shows how the military past has shaped the country. This museum is the national museum of military history located in Ottawa Ontario, Canada along the Ottawa River.

4. For what purpose was this art created?

This wartime art piece was created to commemorate the Canadian involvements and achievements during the battle of
Ypres in 1915. Richard Jack does an excellent job to capture the chaotic environment of wartime efforts. His painting represents the unique personal encounters of the soldiers and their environment during the wartime efforts. Illustrating the use of artillery, the injured and dead soldiers, the heavy smoke and the muddy environment, Jack demonstrates the great chaos that war brings. The great detail to depict facial expressions of the soldiers in the time of battle captures the individual efforts and emotions that describe the
seriousness and difficulties that this war represented. By creating this piece of art, Richard Jack is able to pass on the significance of the Canadians in the war, and deliver to the viewer the achievements along with its losses associated with wartime participation. This painting helps to capture the experiences and emotion that wartime represents, through the eye of the artist as well as the soldier. This visual record radiates the extraordinary sincerity and emotional intensity at this moment in time which can hopefully be passed on
to future generations who did not experience such events.

5. What does this piece of art tell us about the experience of war?

The painting, “The Second Battle of Ypres 22 April to 25 May 1915,” painted by Richard Jack, portrays the true
battle at Ypres during World War 1. Although, Richard Jack, did not participate in the war himself. His painting is still credited with being an accurate description of what it was like for Canadian soldiers at this battle. This piece is known to be accurate because it was accredited by Sir Edmund Walker, who sat on the advisory board for the Canadian War Memorials Fund. He believes that Jack has done an excellent job recreating the Canadian experience at Ypres. However, Walker does admit that he does not think that Jack’s work would be popular with Canadians because the painting shows the traumatic violence witnessed by the soldiers themselves which is a very dramatic image. The images include men in bandages, as well as the dangerous and terrible conditions of the battlefield. The painting shows the struggle that Canadians had at Ypres. This painting successfully documented Canadians and their role in the First World War. Unlike the opinions of Walker, the piece has been recognized to this day as one of the most popular of the First World War.

6. How accurate is this depiction of war?

The artist was not actually present at the event taking place so it is not an accurate depiction of the actual historical event. However, many of the details seen in the painting are accurate. We can see the trenches that were symbolic of the warfare in the First World War. The use of the machine gun can also be observed. The introduction of the machine gun changed how war was conducted and contributed to the development of trench warfare as armies were forced to dig in so that they would not be decimated. There is also a German assault in progress with large number of forces. This was one of the only ways to try and take a fixed position during the First World War, charge one specific position with superior forces in hopes of overwhelming the enemy. The painting therefore does show an accurate depiction of war, although the scene depicted did not actually happen.

This piece of art helps further our understanding of Canadian history because it shows one of the various operations Canadian troops were involved in during World War I. The Canadian soldiers held up a heroic defence against the Germans during the Second Battle of Ypres. This artwork illustrates the high volume of casualties that were created due to war and the emotional involvement in such a battle. The heavy smoke and discoloured sky illustrates the use of poison gas that was used in battle, which marked the first mass use of poisonous gas by the Germans on the western front. This piece shows the harsh realities that were faced during the First World War and the difficult conditions that Canadian soldiers faced. The Canadian government wanted to commemorate these soldiers who worked together to hold off the enemy and the horrors they faced.

Posted on March 21, 2014, in Uncategorized. Bookmark the permalink. Leave a comment.