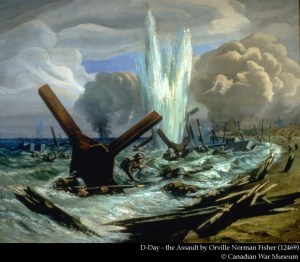 What aspect of war, or event, does this piece of art depict?

This artwork is depicting the terrifying odds that soldiers faced in war, and the courage required to fight. Fisher’s painting is looking at one of the most famous offensives in World War 2, namely, the D-Day landings. The painting itself shows a group of soldiers advancing through the water on to the beach as artillery shells explode around them. Between the tank traps, the explosions, the smoke clouds, and the pounding waves, the soldiers themselves look very small. This serves to emphasize the terrible odds the soldiers were up against. At the same time, this also goes to show the tremendous courage of the Canadian soldiers who fought through this terrifying experience. It is difficult to imagine what D-Day must have been like to someone on the ground, but this painting helps us to realize what this experience must have been like. It is because of the terrifying odds that this artwork almost takes a heroic tone. Here are these few soldiers, foundering through the sea in the face of overwhelming opposition, and yet they keep fighting on to victory. However, it never loses that sense of how brutal the invasion was, with the massive explosions in the background and the broken bodies floating out to sea.

Who created this piece of art?

Orville Fisher was an incredible artist during the years of the Second World War. He was born in Vancouver in 1911 and began his career as a war artist in 1942, depicting battles and lives of the 3rd Canadian Infantry Division. Fisher was an artist who was not afraid of taking risks for his art. He is, to this day, known as one of the biggest providers of information on the Second World War and just what exactly Canada’s role in it was. Fisher was the only known artist to actually be on the beach in Normandy that awful and horrific day, which is depicted in this painting. To ensure accuracy, Fisher also chose not to rely on memory at a later date; and so he strapped waterproof sketching materials to his wrists and took the time in the midst of all of the commotion and horror to sketch some quick and rough drawings of the blood bath going on all around him. “The coast was a neutral landscape – greys and khaki and dark browns when the khaki uniforms got wet. The only bright colors on the beach were the flags showing where each unit was to land….The water was literally red with blood.” He was then able to paint larger images of the historic day at a later time. Fisher’s style was a lot of watercolours, he also used a lot of neutral shades in his work. Most of his work portraying soldiers of the time depicts very barren and sad looking landscapes, that being said, neutral shades were a very important part of his style in terms of driving home the message during the Second World War.

Where was this piece of art created?

Upon being deployed as a war artist, Orville Fisher’s painting of D-Day- The Assault was rooted from a quick rough on-the-spot sketch he drew in the moment when the troops first landed in Normandy in 1944. He later painted his drawings into full size watercolor paintings both from the sketches he made and from his first hand memories of the attack. That makes these paintings as real as possible, bringing the terror to life. This painting now lies in the Canadian War Museum, in Ottawa, Canada.

For what purpose was this art created?

What does this piece of art tell us about the experience of war?

This painting was based off a real, on the spot, in the action sketch made by the artist Orville Fisher. He was deployed with the Canadian troops to sketch images of them storming Normandy on D-Day. This painting depicts the most real emotions and captivates each viewer, knowing that this is what the artist actually witnessed during the assault. This memory was still fresh in his mind when he recreated the sketches into the watercolor that it is today, of the Canadian soldiers who were trying to get ashore, passed the obstacles, bodies, and though the non-stop gun and shell fire aimed to keep them out.

How accurate is this depiction of war?

Orville Norman Fischer’s D-Day: The Assault is a fairly accurate depiction of what Canadians faced on Juno Beach. One of the things that was quite accurate for Canadian troops was the lack of dead bodies. In the bottom section of the painting there are two men with their heads in the water, supposedly dead, but they are the only visible dead. For some landing at one of the five D-Day beaches, they lost many, but the Canadian group at Juno beach was able to gain several miles in the first day.  Although the Canadian units were able to gain some miles with relatively few issues, it is still accurate to have some explosions in the background, as they were still under fire. The landing craft pictured also look like those that were used for the amphibian landing for most of D-Day. The fact that the sky likes semi-clear, but also clouded is fairly accurate. Many believed that at the beginning the weather would be poor, but it managed to hold off for a bit, so the mixture of blue sky and cloudy is pretty accurate. The ‘X’ shaped anti-tank barriers that soldiers are seen hiding behind are also quite similar to those that were on the beaches at D-Day.

D-Day the Assault helps us understand the awful odds that Canadian soldiers were up against. This can be seen through the bodies in the water, and the amount of wreckage on the beach and in the water. This also helps us understand some more recent events in Canadian history. It can teach us why Canadian has been reluctant to join other countries in war. As seen at Canada’s entrance into WWII, Canada used to be very keen on supporting another country, especially Britain, but now is more reluctant as harsh Canadian military campaigns have become widely known as dark moments for many soldiers. We also think this brings to mind a bigger sense of patriotism, and that many more men were willing to lay their life on the line for others. We think it shows a vast difference to today, when it is most common to hear people say they are entering into a military career for reasons like free school and early retirement. This portrays the extreme sense of patriotism that the men who fought in this battle had. It also makes us think about how emotionally traumatized these men would have been, and that there was no idea of post-traumatic stress disorder at this point. It helps us understand why so many veterans stayed silent for so many years after the war.